I am really looking forward to this event hosted by fermynwoods contemporary arts in Corby, Northants next week. If you are in town or nearby and interested, the event is going to be in Corby’s Irish Centre. Kick off on Tuesday 5 September is at 1900hrs. 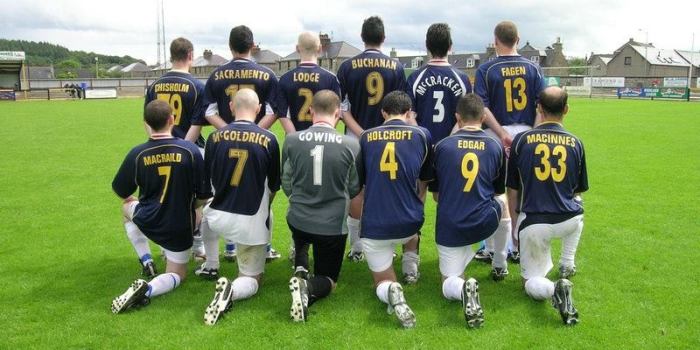 “Join football fans, an artist and a writer, at a free and informal talk about identity politics and football.

Roderick Buchanan is an artist based in Glasgow who is interested in how sports, games and recreational activities can express and communicate issues of race, nationality, aspiration, culture and identity. Roderick is also working with Celtic and Rangers fans based in Corby to produce a new film.

Dr Jon Blackwood is a writer and lecturer at Gray’s School of Art, Robert Gordon University, Aberdeen. He is interested in contemporary art, politics and national identity. Now based in NE Scotland, he continues to divide his time between Scotland and the former Yugoslavia.”

If you can’t make it the discussion will be filmed and posted later on youtube. I have a few choice images to share, but it will be interesting to hear a Northants audience explain “contributions” to football aesthetics like this:

(This image is a useful counter-weight in any argument with 1980-s nostalgiacs).